A Wild and Wacky Tour of Ho Chi Minh City

For tourists, seeing the Vietnamese city from the sidecar of a WWII Soviet chopper is a blast

“There are four million scooters in this city,” Mr. Mai Binh shouted over the throaty roar of his motorcycle engine, “but there are only a handful of these!” He grinned and knocked on the gas tank of the dark gray Ural M67 motorbike he was straddling, and to which I was quite comfortably attached, seated in a sidecar bolted to its frame.

The Russian-built chopper—the type used by the Red Army in World War II—drew a lot of attention as we sped through the streets, and more than a few curious locals took photos of us when we were stopped at traffic lights. “They think you are some president or film star,” Mr. Mai Binh teased.

A native of Ho Chi Minh, Mr. Mai Binh knows his way around the city in more ways than one. He maneuvered the bulky Russian machine through the narrowest of alleyways—like the proverbial camel through the eye of a needle—as we motored through Chinatown’s wholesale markets, past vendors hawking a variety of goods including rice, chickens, lanterns and giant springs. “I’ve driven around these roads thousands of times,” Mr. Mai Binh reassured me. “We’ll make it!”

At Phuc duc Chinh Than temple, where it looked like the only place to park was a very long walk from the entrance, Mr. Mai Binh hopped off his motorcycle and had a quick word with the security guard. Moments later, we zoomed toward the temple door and parked in a spot just steps from the entrance.

“The Chinese believe he is the God of Business,” Mr. Mai Binh explained to me of the divinity who resides within the temple, as we padded barefoot around the low-rise concrete building. “They come here to seek good luck for their business.”

Tours on two-wheelers are common in Vietnam, and are typically offered on the back of a Vespa or other scooter. In 2012, Mr. Mai Binh bought the Ural M67 from a friend and started Sidecar Adventure Vietnam. Today there are 20 sidecar owners who offer tours through the business, which Mr. Mai Binh runs with his wife. They can accommodate groups as large as 22 people. 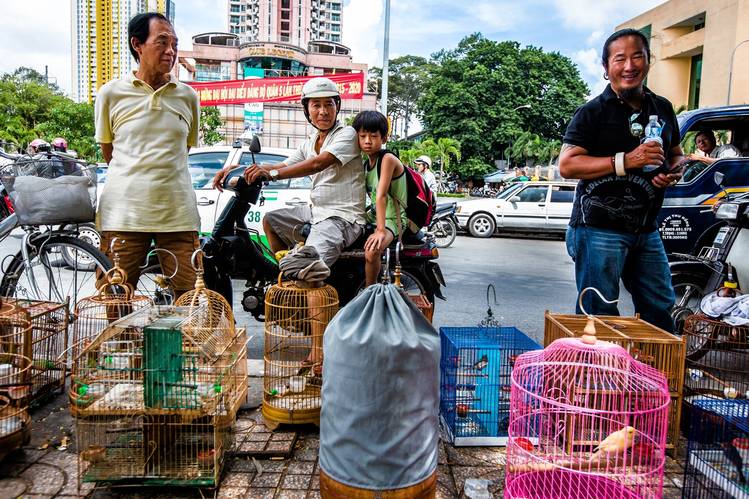 Seated low in the sidecar, I felt connected to the road and to the city itself, as two-wheelers zoomed all around us. Most important, I felt safe: The handful of times I’ve been on the back of a scooter in Vietnam I’ve always feared having my knees crushed as the driver zigzagged though the city’s famously tight traffic. I also appreciated the relative luxury of being able to stretch out my legs and enjoy an unobstructed view ahead of me, instead of peering over the driver’s shoulder to see, as I had on previous scooter tours.

In Chinatown, while we were riding past the clothing stores on Nguyen Trai Street, Mr. Mai Binh noticed me spying a sugar-cane-juice stall and stopped to treat me to a glass. Near the end of the ride we pulled up at Binh Tay market, where he led me through stalls piled high with vegetables, grains and buckets of fish.

One section was populated with more hat sellers than I could count. After searching for just the right chapeau, I found a beige raffia trilby that the vendor sold me for 90,000 dong (about $4). “That hat would cost you $10 in Ben Thanh market,” Mr. Mai Binh told me, referring to the District 1 market that swarms with tourists. I got a bargain, to be sure. A stylish souvenir of my trip and of Mr. Mai Binh, who carried me low to the ground and closer to the real Ho Chi Minh City than I’d ever been. Sidecar Adventure Vietnam; two-hour tours start at about $110 per person; +84-93-219-9991.